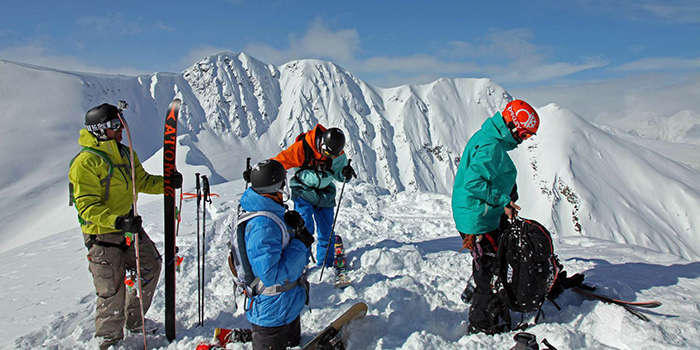 The day the Fleischer Sport team hit the slopes all together was nothing short of epic. The night before, we had been hit with one of the very few accumulating snowfalls of the season. With 21 inches on top, it was the day we were all waiting for. We started out by slashing Powder turns all over Storm Peak North and Tornado (Storm Peak’s lift line) for the better part of an hour. On one run, I followed right behind Chad and Cailean as we came to a cat track directly under the lift. Not really knowing or caring how much speed we had, we all jumped off the cat track and came within a few feet of hitting our heads on the people’s skis on the chair lift 20-some feet above. This set the tone for the rest of the day.

Next we headed to the Morningside area and hit the Chutes. I decided to go down a pretty hairy line that was hit with avalanche mortars earlier in the morning, exposing rocks, sticks and ice. As we all regrouped at the bottom of Chute 1, I looked back and saw Chad boost off the top of the cliff and stomp the landing, from about 30+ feet. This definitely made everyone want to step it up. The next run we hit was East Face. As we went down, Torre and I cut left to Million Dollar Rock, a local favorite. This cliff is sick! It’s anywhere from 30 to 60 feet depending on whether you go off the top or the side and how much speed you bring into it. Torre, one of the two snowboarders in our group, hit it off the top with a good amount of speed, ollied up, reached for the grab and disappeared out of my sight. Next it was my turn, and knowing that I had to clear his bomb hole, I went from a little higher and popped off the top, dropping 30+ feet down to the landing. The landing of Million Dollar Rock is right next to the entrance to Second Pitch. So, we all made the short hike to the top of Second Pitch, took a group photo and went down cutting to the left. Here, there are two good cliffs to hit on both sides of the trail. The cliff on the right is smaller but has a really flat landing, and the cliff on left is considerably higher but has a much better landing area. Earlier in the season, I overshot the smaller cliff, landed flat and cracked my chin open with my knee, knocking myself out and cracking two molars … not fun. T hat turned me off this cliff for good, so when it came time to go down, I led everyone left. Here, Torre got two cool shots of Chad and me jumping through the air (the pictures speak for themselves). This cliff has a lot of options. The top is definitely the best place to boost off of but there are other routes down that aren’t so gnarly. After losing my ski pole in the snow, we all gave up looking and skied down. Once we got onto the cat track, we all took a right and hiked to the top of Pony Express. Luckily this lift was closed for the season and we got untracked powder.

After this some of us were done for the day and went down to the St. Cloud Mountain Club for our après ski party.

Tim and I went to the park though and hit the jump line for a few runs. The park at Steamboat isn’t the best but each year it has been getting progressively better. This year we had a 30-foot jump that lead in to a 50 footer. Tim got a few good 360s and a 540 that was pretty clean and I finally landed a 900 (couldn’t get it earlier in the day for some reason). Once we’d had enough we caught up with everyone at the St. Cloud Mountain Club where Chad and his wife are members.

The St. Cloud Mountain Club is a full-service ski club during the day and turns into the base area’s only martini bar after 5 p.m.

So, we all regrouped and grabbed seats outside. After eating we moved back inside and proceeded to party. Jagermeister! By 6 o’clock, everyone was laughing and having a great time. I think the intense skiing and hot sun combined with the alcohol consumption had a little more of an effect on us than we had expected. The next morning I woke up on my friend’s couch in full ski attire, cradling my skis and one pole, a few miles away from the mountain. (and yes, my boots were still on).

It was an awesome day of skiing and partying with friends and was the perfect conclusion to a successful ski season. Despite Cailean’s sprained ankle and Brett’s broken thumb, we all made it through the day unscathed. See you out there!

I Can’t Ski On Those

Are You Jonesing? Life After Snow Melt

We want to wish everybody a HAPPY NEW YEAR! #happy

From all the Fleischer Sport family we want to wis

Enjoy a great #apresski with us and and a refreshi

See it all with @dragonalliance LUMALENS technolog

How’s our friend @steven_nyman doing during the